Give the Brain a Workout with BJJ Coach Give the Brain a Workout with BJJ Coach
By: Ryan Berry
Indianapolis, Indiana, USA
I have found that Brazilian Jiu Jitsu is a great mental workout as well as physical. In fact, the ‘game’ of BJJ is often referred to as human chess, because it is comprised of a series of decisions made in combat that can ensure success or failure in the match. Keeping a cool head and having a firm understanding of the game can help a competitor avoid making costly mistakes, and that can compensate for going against an adversary in superior physical condition.
As a person advances and becomes more experienced in Brazilian Jiu Jitsu the movements become more second-nature to them. Due to muscle memory that has resulted from hours of practice, hundreds of repetitions, and many training partners, the correct execution of the details of the positions and techniques no longer overwhelm the mind of the practitioner. Rather, choosing the correct weapon for the situation from the arsenal of hundreds of techniques becomes more crucial and makes the difference in the match. In his Student Handbook for his Indianapolis Jiu Jitsu School and BJJ World Association, Marcello Monteiro reiterates what he is always referring to in class about being mindful of points at all times during the training and maintaining position. To be a good jiu jitsu player, you must have good foresight and know where you are trying to go in the match. As a competitor moves up in rank he must be thinking and planning further and further ahead. As Marcello states in his books, a blue belt should be thinking two steps ahead in matches. Purple belts should be thinking 3-4 steps ahead of their training partner in each position. A good brown belt should be thinking 4-5 steps ahead into the match, and by the time a practitioner reaches the black belt level he or she should be playing the game he wants to play during trainings. All of this foresight comes from both experience and the mental aspect of BJJ.
For beginners such as me, keeping everything straight in our heads and looking ahead in the match can be one of the biggest challenges, especially when training with a more seasoned blue belt. Just like in high school math class, seeing a technique performed by Marcello and then taking it through a couple of practice runs with our training partner is like seeing the teacher do a complex algebra problem on the chalkboard. It seems simple when you are just watching it, it makes perfect sense to you then and you think you have got it down pat. But during a sparring match, just like during test time in math class, your mind can draw a blank if you haven’t prepared with enough practice repetitions. The sooner we beginners can keep a clear head during a match, look ahead in the match, and watch for common mistakes to capitalize on, the better we will become more quickly. Through muscle memory and a fluid understanding of the overall game you can improve the mental aspect of your BJJ game. Then your game will certainly take off!
So for everyone out there like me that doesn’t have exceptional strength and doesn’t like to rely solely on brute force, jiu jitsu could still be the sport for you. The mental aspect can be taxing at times, but is generally the deciding factor in most matches. 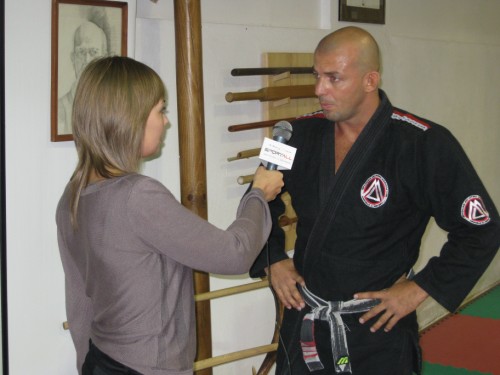