Fighter’s Predictions For McGregor VS Alvarez

Raquel Pennington: Every fight, I’ve always been kind of like, ‘Everybody except for McGregor,’ but I think I’ll just choose McGregor for this one. I’ll just make it simple.

Katlyn Chookagian: I’ve got Eddie. He’s fought everyone, all over the world. This isn’t a big deal for him. He’s just not gonna get distracted by that and I just think he’s more well-rounded, especially training with Mark Henry. He’s gonna be on point about everything.

Kelvin Gastelum: I’ve underestimated Conor every time. I don’t know if I’m believing the hype. When I think he’s gonna go out there and lose, he goes in there and wins. Not to take anything away from Eddie — I think Eddie is the best lightweight in the world — I just think somehow, some way that slick Conor is gonna get it.

I don’t know why I’ve underestimated him. Maybe because his personality is not one to my liking.

Frankie Edgar: I’m obviously riding with Eddie. I think Eddie is gonna stop him in the third. I’m not too good at predictions.

Thiago Alves: The only way I see Conor winning is by a lucky punch if Alvarez gets sloppy, he might catch him with a left hand. If the fight drags on, it’s gonna be a bad night for Conor.

Belal Muhammad: I honestly think that McGregor is gonna go in there and finish him. I think he’s seen Alvarez’s style a lot. Alvarez is one of those guys that moves forward all the time. He’s a wrestler. I don’t think he’s that good of a wrestler, but he’s a wrestler. And McGregor has seen them so much that he’s gonna be comfortable, and I think he’s gonna catch him with a left.

You see a lot of people even talking, like ‘I don’t want to be around him.’ He seems cool to me, man. He’s funny.

Tim Boetsch: Honestly, that’s one of those fights that can go either way. Alvarez, he’s one of those guys that I really admire as a fighter. He’s just a gritty guy that’s willing to do whatever it takes to win. Conor always has a good game plan. If he’s able to execute his game plan, he’s dangerous and very tough to beat. It’s just a matter of who gets in there and imposes their will. That’s a fight I’m very excited to see.

It’s easy to get lost in all the hype, trash talk, flashy headlines, and mainstream attention that this fight is getting, but let’s not forget that this fight could very well make MMA history. UFC featherweight champion McGregor will be attempting to become the only fighter to ever hold two UFC belts in different weight classes at the same time.

McGregor is way more than just hype. The Irishman is precise with his striking, attacks from odd angles, and possesses a left hand that can crack some of the toughest chins in MMA. He also has good, fluid movement of his feet, decent grappling skills, and has shown a great ability to take a hit. His opponent, Alvarez, could very well be McGregor’s kryptonite, as Alvarez can take a hit, and when wobbled has proven to have exceptional survival instincts. He also has a solid wrestling game that can shut down elite fighters.

I think Alvarez possesses all the tools needed to defeat McGregor – wrestling and durability. I talked to Rashad Evans leading up to this fight and he picks Alvarez to beat McGregor. Evans says that Alvarez can wrestle and pin McGregor against the fence. But it’s not about taking down McGregor, it’s about wearing him down, as he’s shown that he can fade throughout the fight, making him less effective. I agree with Rashad and I think Alvarez has the ability to grapple his way to a victory, but I don’t think that will be the case.

With the criticism that he received after the Anthony Pettis fight, the heated trash talk with McGregor, and his new-growing confidence in his striking, training with Mark Henry, I see Alvarez not wanting to impose his wrestling, and entering a striking battle with McGregor. Alvarez often gets rocked in his fights, but rarely finished. And I think McGregor has the power and precision to not only hurt Alvarez, but actually stop him.

I have a hard time making a pick for this one. Both these guys have looked very impressive in their most recent bouts. Thompson put on a striking clinic on former champion Johny Hendricks, while Woodley proved that he can knockout anyone in the welterweight division by stopping Robbie Lawler.

Everyone I talk to seems to be picking Thompson with ease, but for some strange reason, I don’t feel comfortable picking against Woodley. I think the common thought is that ‘Wonderboy’ will confuse Woodley with his karate style, and keep him at the end of his wild kicks. But we have to also acknowledge that Woodley has the capability of cutting the space that Thompson operates in, and landing a knockout punch. I think the first option is the more likely outcome, yet, my gut is telling me not to pick against Woodley.

Jedrzejczyk has been on fire lately, and I doubt that’s going to stop anytime soon. To me, Jedrzejczyk reminds me a bit of Demetrious Johnson in the way that there is no big threat to her title that stands out in the 115-pound division. This is the easiest fight to pick on the main card, but there’s still one big question that concerns me. How will Jedrzejczyk look Saturday night having switched training camps to American Top Team? This is a legit question because it’s a big change for Jedrzejczyk, and usually, it takes time to get comfortable to big changes. ATT is a great team, but we don’t know how ATT’s training suits Jedrzejczyk. If Jedrzejczyk is not on point Saturday night, there is a chance Kowalkiewicz leaves MSG with the belt.

Kowalkiewicz is a solid, well-rounded fighter, that’s very consistent with her performances. She’s has great conditioning and operates at a very high pace, which shouldn’t really be a problem to Jedrzejczyk, as she’s always well-conditioned too. I’m picking Jedrzejczyk, but I think her change to ATT is something worth considering. If Jedrzejczyk is not on point, Kowalkiewicz could make it a close five-round fight.

This fight interest me a lot stylistically. Romero is crazy athletic, has decent striking with stupid power, and has the best wrestling resume in the UFC. But despite incredible credentials, Romero doesn’t have the most effective wrestling in MMA, as he’s had issues fully applying his insane wrestling skills to his MMA game. I think Weidman is a bad match up for Romero because the former champ has the skills to avoid getting taken down by the Cuban fighter, making it a stand up battle where Weidman should have the edge. But with that being said, I’m picking Romero. Somehow, even in the worst possible situation, Romero always finds a way to win in a weird way. I think it’s going to be another odd fight that ends with Romero getting his hand raised.

Pennington is tough, hits hard, and can be vicious with her striking. This is generally a bad thing for Tate, but not this time around. I see Tate’s octagon experience and craftiness being a huge factor in this fight, and outweighing Pennington’s advantage on the feet. Tate has just enough striking skills to hang in there with Pennington before scoring some kind of takedown on Pennington. I think this fight plays out on the ground, and Tate takes home a decision win. 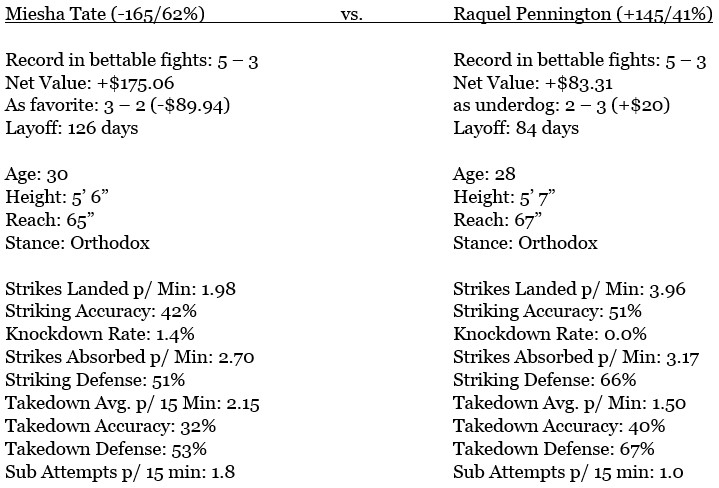 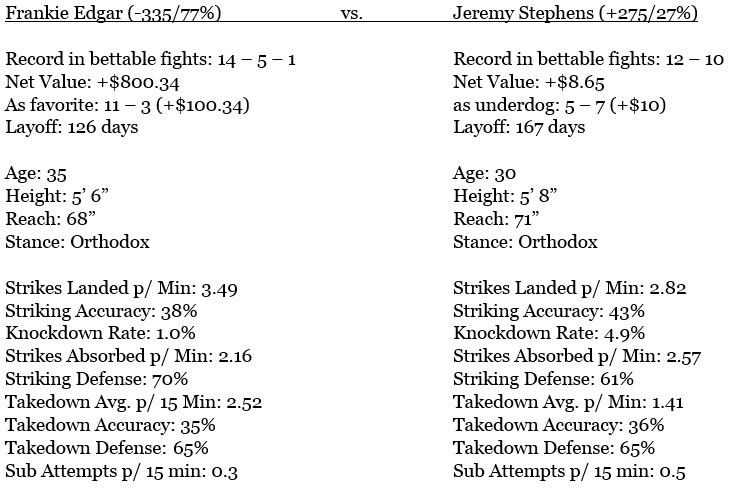